Yoko Ono urged the world to give peace a chance Tuesday as she unveiled a monument in memory of her husband, John Lennon. 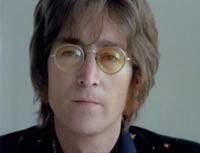 Ono lit up the Imagine Peace Tower on Videy island near the Icelandic capital's harbor on what would have been Lennon's 67th birthday.

The former Beatle was shot dead outside his New York apartment building on Dec. 8, 1980 by deranged fan Mark David Chapman.

"We're all here for Johnny.s birthday and the big light," Starr said. "I love the light."

Paul McCartney also was invited, but did not attend.

The tower is a beam of light, radiating from a wishing well bearing the words "imagine peace" in 24 languages. The plan is for it to be lit each year between his birthday, Oct. 9, and the anniversary of his death on Dec. 8.

Ono, an artist, said she had gathered hundreds of thousands of wishes for world peace at gallery shows around the world. The wishes will be stored in capsules and buried on the island, each topped with a tree.

Ono, 74, has said she came up with the concept for the light tower in 1965 and that Lennon was interested.

"I got the idea because I just liked the romantic idea of having a building that just appears, emerges once in a while but sometimes it is not seen," Ono said on Iceland's Channel 2 television.

She said the world was less peaceful now than 40 years ago, but she said her faith in humanity was not shaken.

"Of course we can bring about world peace because we are very reasonable people," she said. "We know that if we don't, it is going to be very painful for us."

She said she chose Iceland, the world's northernmost country, because it was a very eco-friendly country that relied on geothermal energy.

"It's so beautiful," she said. "There's a certain strangeness to it. I would like to say it's magical."