American and British rock and folk singers will stage a concert on Mount Everest for a cancer charity and a bid to earn a world record for the highest concert ever, organizers said Wednesday. 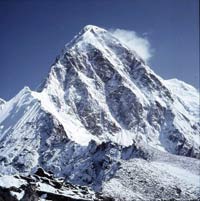 The concert, on Oct. 21, will be held at 5,550-meters (18,200-feet) near the Mount Everest base camp used by mountaineers who scale the world's highest peak, said James Chippendale of the Colorado-based Love Hope Strength Foundation which campaigns for better cancer treatment.

The concert will feature Mike Peters of the British band The Alarm, Slim Jim Phantom of the American rock group Stray Cats, Britons Cy Curnin and Jamie West-Oram of the The Fixx, Glen Tillbrook of the Squeeze and British folk singer Nick Harper.

Chippendale said they have checked with Guinness World Records and other record books and confirmed it will be the highest concert ever performed.

Seven cancer survivors will be among the 38 people from the U.S., Britain, Australia, Canada and France who have registered to trek on Oct. 13 to the concert venue at Kalapathar, said Chippendale, 39, from Dallas, Texas, who is also a cancer survivor. He had a bone marrow transplant in 2000.

"The concert signifies our climb back from cancer," he said,and the foundation hoped it would inspire others to successfully fight the disease. "We are taking the battle against cancer to new heights."

The Alarm's Mike Peters has also suffered from cancer.

Money raised from the project will be used to buy equipment for the Bhaktapur Cancer Hospital near Katmandu.