A high school English teacher wanted take her pistol with her to school because she was afraid that her ex-husband could show up and try to harm her. She was also worried about a Columbine-style attack. 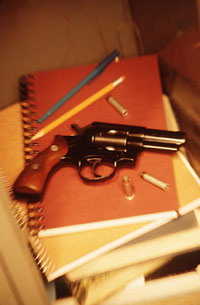 But Shirley Katz's district has barred teachers from bringing guns to school, so she is challenging the ban as unlawful, since Oregon is among states that allow people with a permit to carry concealed weapons into public buildings.

"This is primarily about my Second Amendment right and Oregon law and the simple fact that I know it is my right to carry that gun," said Katz, 44, sitting at the kitchen table of her home outside this city of 74,000.

"I have that (concealed weapons) permit. I refuse to let my ex-husband bully me. And I am not going to let the school board bully me, either."

In Oregon, a sheriff can grant a concealed-weapons permit to anyone whose criminal record is clean and who completes a gun-safety course.

Thirty-eight states, along with the District of Columbia, prohibit people from taking guns to school, according to the National Council of State Legislatures. But it is unclear if special weapons permits offer an exemption, since the council does not track such exceptions.

School Superintendent Phil Long insists employees and students are safer without guns on campus. The district plans to make that argument when the case comes before a judge on Thursday.

Katz's request appears to be rare. School security consultant Ken Trump, president of National School Safety and Security Services in Cleveland, said he has never heard of a similar case while working in 45 states.

Katz will not say whether she has ever taken her gun to school, but she practices with it regularly and has thought about what she would do if she had to confront a gunman. She would be sure students were locked in nearby offices out of the line of fire, and she would be ready with her pistol.

"Our safety plan at our school now is that if somebody threatening comes in, you try to avoid eye contact, and do whatever they say, and that is not acceptable anymore," she said. Shootings at Virginia Tech University and the one-room Amish school in Pennsylvania, "reinforced my belief we have to take action, we can't just acquiesce as we have been taught to do."

Katz never owned a gun until she and her then-husband, commercial photographer Gerry Katz, moved to Oregon from Atlanta eight years ago and bought 20 acres (8 hectares) on a gravel road in the foothills of the Cascade Range.

"Being out in the country, we just felt we needed to have a gun here for personal safety," she said.

In 2004, Gerry Katz, who had a concealed weapons permit, was arrested for pulling a .38-caliber revolver after a confrontation that began in a parking lot with two men whose car almost hit his.

According to the police report, he did not point the weapon at anyone. The police seized it, and the charges were later dismissed. Gerry Katz said he never went back for his gun.

Shirley Katz said she bought her own gun in 2004 after Gerry Katz grabbed her by the throat and threatened to kill her - an allegation he denies.

He argues that her desire to take her gun to school is about reopening their divorce to get exclusive custody of their 6-year-old daughter.

"She's just scamming everybody," he said. "As soon as this thing started ... I called the principal at her high school and told her ... I am not coming to your school. I am not a threat to her. I have no desire to hurt her."

Oregon had a school shooting in 1998, when student Kip Kinkel killed his parents at home, then drove to school and opened fire in the cafeteria of Thurston High School in Springfield, killing two and wounding 25 others.

Since then, the Legislature has considered barring people with concealed weapons permits from carrying guns in schools, but the bills have failed, said Dori Brattain, general counsel to the Oregon School Boards Association.

Some South Medford High School students say they are uncomfortable with the idea of a teacher carrying a gun, especially since they cannot bring even scissors to school.

"I totally understand she wants to protect herself," said Lauren Forderer, 16, a junior. "But I don't agree she should bring her problems around 2,000 other people."

Even if she wins, Katz said, she may not bring the gun to school.