The British government wants to ban the incitement of hatred against homosexuals. 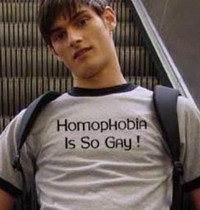 The proposed law would make inciting hatred of gays, lesbians and bisexuals unlawful, Jack Straw told lawmakers, adding that the law could be extended to ban the incitement of hatred against disabled or transgendered people "if a case can be made."

"It is a measure of quite how far we have come as a society in the last 10 years that we are now appalled by hatred and invective directed at gay people," Straw said. "It is time for the law to recognize this."

The proposed law, applauded by homosexual rights campaigners, comes only days after a controversial law on inciting religious hatred came into force.

It is now an offense in Britain to intentionally use threatening words or behavior to stir up religious hatred.

The incitement of racial hatred has been against the law since 1986.