Nicholas Sparks can count the number of written novels on his fingers. 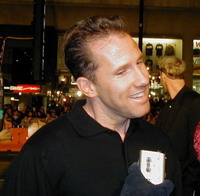 One finger: "The Notebook." Two fingers: "Message in a Bottle." Three fingers: "A Walk to Remember." And so forth, until he starts over with the first hand to reach the latest, number 12: "The Choice."

It is, he says, in many ways like the other 11: set in eastern North Carolina, with likable characters in realistic situations. And it is likely to be similar in another way: So far, all the novels have been best sellers for Sparks, who has sold about 60 million books worldwide and had three novels made into movies. A fourth, "Nights in Rodanthe," is to be released next year.

In "The Choice," Travis Parker is a fun-loving veterinarian. Gabby Holland, a physician's assistant, moves next door, and their meeting puts Gabby at a crossroads.

The story line of "The Choice" comes from two thoughts: Sparks' desire to return to the structure of his first book, "The Notebook," in which characters face consequences later in life from events that happened earlier, and his time coaching track at New Bern High School the past two years.

"I find myself on a daily basis with these young men saying, 'Go to school' or, 'Do your homework and don't talk back to your teachers and make sure you do what your parents ask you,"' says Sparks, who still holds the record at the University of Notre Dame for the 4x800 relay. "I always follow with the thought that because what you do today has consequences for the future. The choices you make today lead to the outcome that your life will be."

His life lessons are making a difference: Five of his six seniors from the last team are going to college this year on track scholarships; the sixth got an academic scholarship.

"Track and field changed my life," says Sparks in a recent interview at his 7,000-square-foot (650-sq. meter) home on the Trent River, some 110 miles (177 kilometers) southeast of Raleigh.

"It taught me more about discipline and perseverance and character than any class I've ever taken, because to be good, you need to show up every day, rain or shine. And for me, I was talented, but I was not supremely talented. To get where I was, I had to outwork people, and it taught me to do that."

He lives with his wife, Catherine, and five children ages 6 to 16, and writes about four days a week, up to five hours a day and produces 2,000 words each time.

"I don't really struggle with writer's block for extended periods," he says while sitting at a kitchen table that bears the stains of his children's color markers. "There are times I struggle with which way I want to take the story, and those can get aggravating. But it passes, and something comes."

Still, writing does not come that easily for him, says his literary agent, Theresa Park.

"It's not like he sits over his typewriter and he hums as he writes," Park says. "He really, really agonizes over every word."

Sparks says the love story is the hardest type of novel to write, pointing to how few people succeed in that genre while many more succeed in mysteries, legal thrillers and the like. He lists "Bridges of Madison County" and "The Horse Whisperer" as among the few recent love stories to find a popular market.

Park was an assistant at a literary agency when she read "The Notebook," not only Sparks' first novel but also the first one she ever sold.

"Once people find out I represent Nick Sparks, everybody in the world who has written a love story pretty much sends it to me," she says. "I haven't found another novel that I feel has a chance to be as successful as a Nick Sparks' novel in that genre."

Park, who describes herself as an "unromantic" who got married at city hall and celebrates her wedding anniversary at McDonald's, recalls reading "The Notebook" while in bed with her husband. She started crying.

"I thought, if it's doing this to me, what's it going to do to the rest of America," she says.

Since "The Notebook" was published in October 1996, Sparks has averaged writing about a book a year and reads more than 100 a year. And Sparks, named "sexiest author" by People magazine in 2000, also lifts weights and jogs, careful not to reinjure the Achilles tendon and plantar fasciitis that forced him to abandon track and field while still in college.

When he is not writing, he is involved in philanthropy. He and his wife have donated more than $700,000 (496,840 EUR) to build the high school track and established a $1.5 million (1.06 million EUR) program in creative writing at Notre Dame, where Sparks graduated in 1988 with a degree in finance. They also opened a private Catholic school in New Bern.

But he protects his privacy. The family lives in a gated house that you get to by crossing a bridge that spans a koi pond. A "Beware of Dog" sign on the fence warns of a German shepherd named Rex, a trained protection dog that answers commands in both German and English. Then there is the small, but not-so-subtle sign advising that Nicholas and Catherine Sparks will not see uninvited guests.

The 32-year-old house will be torn down in a couple of months and a new one constructed with a first floor master bedroom and protection on the patios from the sun so the sports-loving family can spend more time outside.

While the setting for where he composes his stories will change, Sparks is adamant that he will not venture from love stories to another genre, such as mystery, legal thriller or horror stories.

"I don't know I could do a horror story any better than Stephen King," he says.

But could anyone do a love story better than Nicholas Sparks?

He pauses and smiles.

"I suppose that's more of a reader's decision. I will say that no one sells as many. How's that?"