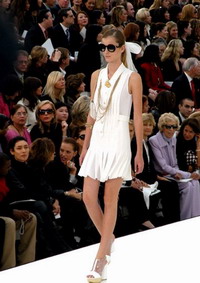 The displays capped a diverse week with competing trends. While some designers fell for bright prints and fit-and-flare dresses with full skirts, others drew from men's fashion with no-frills tailoring in somber shades.

"Spring was all over the place, which I think makes it hard for people to write about or to criticize or encapsulate in a magazine, but I think it makes it great for the consumer," he said.

Stars including musicians Kanye West, Courtney Love and Jamie Cullum pressed into the Vuitton show, held in a tent in the courtyard of the Louvre museum, where models paraded in flashy outfits inspired by U.S. artist Richard Prince.

American designer Marc Jacobs has propelled Vuitton to the top of the style stakes by asking contemporary artists to customize its trademark monogram bags.

For next spring, he sent out totes and handbags featuring bleeding stains of color and sentences lifted from Prince's work.

Panels were sliced from the back of masculine staples, so that a trench coat revealed a saucy lilac girdle and a tuxedo jacket exposed a lacy pink bra.

"I thought it was quite cheeky," style icon Victoria Beckham told The Associated Press. "For me it was a very, very fun collection."

Photographers waiting for the show to begin were less amused, loudly booing before the display started more than an hour late.

Jacobs last month got into a high-profile spat with influential International Herald Tribune critic Suzy Menkes when his show in New York ran two hours behind schedule. In her review, she criticized his attitude and said his designs were a weak copy of other people's work.

Backstage after the Vuitton show, the designer - who completed a stint in rehab earlier this year - was a jangle of nerves, and Menkes was nowhere to be seen.

"I hope you weren't out there complaining!" he said as he greeted friends, pausing to ask a collaborator for cigarettes. "I'm really freaking out here!"

Jacobs said the outfits were inspired by Prince, who created controversy in the 1970s by re-photographing existing images.

"Richard is the king of appropriation, which I totally believe in as long as one changes at least three things, which we always do - regardless of what any critic might say," he said.

It is an open secret that many designers raid vintage clothing stores for inspiration, and Jacobs deserves credit for his honesty.

Lanvin designer Alber Elbaz, however, believes the vintage trend is over and must give way to a new way of creating. His draped toga gowns and ruffled satin cocktail dresses raised a roar of approval from buyers and critics, who leapt to their feet to applaud him.

The toga dress was a theme of the Milan collections last week, but Elbaz has developed a distinct vocabulary that wipes out comparisons.

It showed in the metal rings that held together a white linen tunic covered in feathers, or a black satin one-shouldered evening gown with industrial zips at the shoulders and seams.

Belgian designer Olivier Theyskens has made remarkably light work of rejuvenating the Nina Ricci brand since his appointment last year. The label is thriving at retail, handbags are in the works and its flagship store on Avenue Montaigne is about to be renovated.

The 30-year-old designer said his slim leather jackets and strapless evening gowns were based on the idea of young women walking home at dawn from a rave party or black-tie ball.

Sunlight speckled the catwalk as models in drop-waisted silk dresses in crinkled light pink or gray silk emerged from a set that opened out onto the Tuileries Garden. The display ended with a full evening dress made from translucent pleated white fabric.

"I wanted to end on a purely Ricci note," said Theyskens, noting the house was celebrating its 75th anniversary in fashion this year.