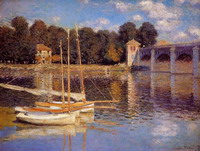 Drunk intruders got into the Orsay Museum by a back door early Sunday and made a hole in a renowned work by Impressionist painter Claude Monet, "Le Pont d'Argenteuil".

A surveillance camera caught a group of four to five people entering the museum, located on the Left Bank of the French capital along the Seine River and housing a major collection of Impressionist artists.

An alarm sounded and the group fled, but not before damaging the invaluable painting, Culture Minister Christine Albanel said.

No arrests were immediately made. There were no signs the group was armed, Albanel told reporters at a news conference.

The intruders tried to force open other doors before succeeding at a back door, "even though it had big bolts," she said. The painting hung on the ground floor with other Impressionist masterpieces.

The minister, who once oversaw the Chateau of Versailles, wondered aloud how a drunken group managed to enter the Orsay Museum - through a door.

"Perhaps there was a fault with the bolt which perhaps was weak," she conjectured.

Albanel said the painting could be restored, but she deplored the damage.

"It's always a heartbreak when an art object that is our memory, our heritage, that we love and that we are proud of is victim of a purely criminal act," the culture minister said.

"We know there were four or five people, likely four boys and a girl, who entered around midnight to 1 a.m., broke a door that was, perhaps, fragile," the minister said. "It appears they were drunk. ... Someone punched the magnificent masterpiece by Monet."

The alarms went off, museum personnel arrived and the group fled, she said.

The painting, shown to reporters, bore a horizontal tear that exposed threads of canvas. It was visibly punched in, perhaps with a fist.

An aide to the minister estimated the gash at about 10 centimeters (nearly 4 inches). The official, not authorized to speak publicly of the matter, asked not to be named.

"Le Pont d'Argenteuil" shows a view of the Seine at a rural bend, featuring a bridge and boats.

Albanel said she would seek improved security in museums and stronger sanctions against those who desecrate art.

The break-in occurred as Paris held its annual all-night festival, which brings thousands of people into the streets for music, exhibits and fun.

On Tuesday, a 30-year-old woman, Rindy Sam, goes on trial for damaging a work of art after kissing an immaculate white painting by American artist Cy Twombly in July, and leaving her lipstick mark on the work. That painting was exhibited in Avignon, in southern France.