Doughnut stealer to get in prison for 30 years

A Missouri man may spend 30 years in prison for stealing a doughnut from a store. 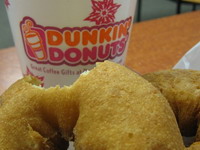 Doughnut stealer to get in prison for 30 years

Scott A. Masters, 41, of Park Hills, Missouri, has been charged with felony second-degree robbery in the theft of a 52-cent doughut from a Country Mart in Farmington, about 70 miles (113 kilometers) south of St. Louis. Store employees said he slipped the doughnut into his sweat shirt without paying last December, then pushed away a clerk who tried to stop him as he fled the store.

The push is being treated as minor assault, which transforms a misdemeanor shoplifting charge into a strong-armed robbery with a potential prison term of five to 15 years. Given Masters' past criminal record, prosecutors could boost that sentence to 30 years to life.

"Strong-arm robbery? Over a doughnut? That's impossible," Masters told the St. Louis Post-Dispatch newspaper from jail. He admitted that he took the pastry but denied touching the female employee. "I've never had a violent crime in my life. And there's no way I would've pushed a woman over a doughnut."

Farmington Police Chief Rick Baker said state law treats the shoplifting and assault as forcibly stealing property. The amount of force and value of the property does not matter.

Masters, who has been arrested more than a dozen times for crimes ranging from shoplifting to drug possession to torching a car for insurance fraud, said he forgot about the doughnut theft as he spent the summer in jail on outstanding warrants.

He was indicted Sept. 14 for the robbery and is being held on $25,000 (17,685 EUR) bail after having his case continued on Friday. With two prior felony convictions, Masters could face a long prison sentence if found guilty because prosecutors could pursue an enhanced sentence.

County Prosecutor Wendy Wexler Horn said it was "way too early to know how it is going to play out," but that the charge seemed appropriate given the store employees' allegations. She acknowledged some are questioning the seriousness of the charge.

"People are missing the point," Horn said. "It is not about the doughnut."

For Masters' part, he did not even get to enjoy his ill-gotten gains. He said he threw the doughnut away as he fled.