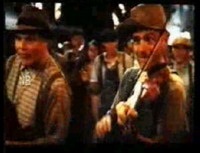 The festival began Saturday and was to conclude Sunday. Headliners included Tom Chapin, who has won three Grammy Awards for his albums of stories for children.

Morgan McPheeters, 17, and her parents traveled from Farmington, New Mexico, to the event.

"Storytelling is great," McPheeters said. "It's not something many people know about or are involved in, but they should be."

Smith founded the festival in 1973 when he was working as a high school journalism teacher. After he and a carload of students heard a story about coon hunting on the radio, he had a sudden inspiration and a festival was born.

Hay bales and wagons formed the stages at that first festival where visitors and tellers numbered no more than 60. Since then the festival's reputation and attendance have grown steadily. The festival now regularly attracts more than 10,000 visitors and this year's event included more than 30 storytellers.

"We all have stories, and we all live our lives through storytelling," Smith said. "It's important to celebrate that because it's the heart of our culture."