Residents of two Manhattan apartment buildings are still not allowed to come back home after an explosion. 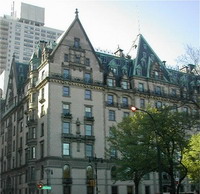 The building in upper Manhattan's Harlem neighborhood was shored up, but the vacate order will be in effect until it is deemed safe for occupancy, said Robin Brooks, spokeswoman for the city's buildings department.

The Saturday explosion hurt more than 20 people, including four children who were critically burned.

The children initially were taken to Harlem Hospital, but were transferred Sunday morning to New York Presbyterian-Weill Cornell Medical Center, said Nicole Beason, a spokeswoman for Harlem Hospital. They were in critical condition, said John Rogers, a spokesman for Weill Cornell.

A gas leak in a first-floor apartment caused the blast, said Fire Commissioner Nicholas Scoppetta. Witnesses to the blast said it blew out windows and air conditioners.

The local utility, Consolidated Edison, had no immediate evidence of a leak, but investigators were waiting until the building was stabilized before going inside, a spokeswoman said.

Other residents said that one apartment was operating as an illegal restaurant, cooking and selling takeout food to taxi drivers. Brooks said investigators found no evidence of an illegal business in the building.