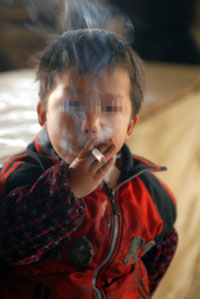 "Unnecessary and lengthy" smoking scenes must be avoided by the TV and film producers, China’s government said, following public complaints about rampant cigarette smoking in a popular miniseries.

"New Shanghai Bund" is a remake of a 1980s Hong Kong drama about 1930s gangsters that turned leading man Chow Yun-fat into a star. The actor who now plays Chow's character has been criticized as an addict because of his constant smoking.

China's State Administration of Radio, Film and Television, or SARFT, has said it would "ask TV and film production companies and inspection agencies to avoid unnecessary and lengthy smoking scenes," the Beijing News reported Friday.

However, the agency would not call for an outright ban of the scenes because there was no legal basis. "At present there is no law or regulation banning smoking," it said.

SARFT made the comments in a document issued at an Aug. 8 anti-tobacco symposium, the Beijing News said. It was not posted on the agency's Web site.

Makers of "New Shanghai Bund" had already edited out some scenes of stylish, chain-smoking gangsters after complaints it could encourage young people to light up, state media reported in July.

An estimated 350 million Chinese are smokers, accounting for more than one-quarter of the world's total. Tobacco-related diseases kill about 1 million people in China every year, and publicity campaigns about the health dangers have begun to turn public attitudes against the habit.