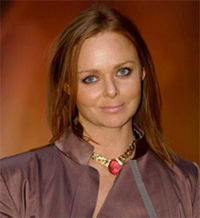 In the new world of fashion marketing, it's all about flooding the zone.

Brands like Stella McCartney have understood that glossy magazine advertisements are no longer the most effective way of reaching their audience. Instead, they are using methods like street pamphleteering, Web sites and linkups with other firms to trumpet their presence.

McCartney, who showed her spring-summer ready-to-wear collection in Paris on Thursday, has inked deals with Adidas for sportswear, LeSportsac for bags and Bendon for lingerie, as well as creating limited editions for high street retailers H&M and Target in Australia.

"So I think it's pretty smart, and it speaks to Stella McCartney's audience, which rejects the current codes of the luxury sector because they are too ostentatious and too obvious," he added.

Wearing loose hair and just a slick of lip balm, they emerged in front of a wall of green plants wearing billowing separates made from washed parachute silks in gentle tones of sky blue and dusty beige.

The British designer used techniques like block-printing and quilting to give her outfits a hippie-luxe feel, emphasized by hand-carved wooden clogs with compensated heels.

But her training on Savile Row, the London hub of made-to-measure men's suits, was also evident in a cream single-breasted tuxedo suit.

Model Twiggy, the face of the Swinging Sixties, said McCartney was carrying on the tradition of cutting-edge British designers like Ossie Clark, Bill Gibb and Barbara Hulanicki, who designed the cult label Biba in the 1970s.

"Where she's brilliant is that there were lots of things that I probably wouldn't wear because it's not my age group, but then she throws in the jackets and the suits that everyone can wear," said the 58-year-old, who has known Stella since she was born.

"It's fun to see mad things that nobody can ever wear, but how wonderful to see a show that's exciting like that and women can wear them," Twiggy added.

McCartney's pragmatic approach to dressing is beginning to pay off. Figures released this week showed her label posted its first profit in 2006, a year before the deadline imposed by its parent, Gucci Group.

The results show it is possible to succeed at the top-tier luxury level without using leather or fur, providing you are a little creative. McCartney is a vegetarian and recently staged an online animal rights protest in the Internet-based virtual world Second Life.

"For a brand like Stella McCartney to perform in luxury fashion today without using leather is not easy," noted Charbit.

"So I think their strategy of doing Adidas, launching perfumes and collaborating with H&M is also a way of saying: 'I exist,' without pushing a handbag like everyone else does with their 'It' bags."