Horses are filling some state-owned livestock pens before they head to a grisly slaughter for their meat in Mexico. 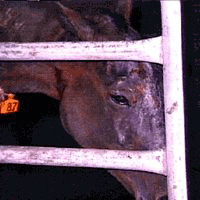 With the only three horse slaughter plants in the U.S. closed, the industry has turned to Mexico and Canada to kill horses for their meat largely for export abroad for diners.

As of this week, the U.S. exported 20,196 horses from Texas for slaughter in Mexico. That's up from 1,109 over the same period last year, U.S. Agriculture Department statistics show.

Through the week of Sept. 22, the latest date for which statistics were available, 29,741 horses had been exported to Mexico for slaughter from Texas and New Mexico, compared to 6,331 for the same period last year. Arizona and California showed no exports of horses for slaughter.

The Humane Society of the United States criticized the Texas Department of Agriculture for allowing companies to use taxpayer-funded pens to help get the horses to slaughter.

The group planned to hold a news conference Thursday to show video collected at the pens and a Ciudad Juarez slaughter plant. It is pushing for a national ban on the shipment or export of horses for slaughter.

The House in August passed a $91 billion (64.11 billion EUR) farm and nutrition spending bill that would make it illegal to transport or export horses for slaughter so their meat can be eaten by people. The Senate has not voted on its version of the bill. Another Senate bill protecting horses from slaughter was approved in committee and a House version is pending in committee.

"The state should have absolutely no role in facilitating slaughter given the existence of a statute that forbids the practice," said Wayne Pacelle, president of The Humane Society of the United States.

The Humane Society used that state law to successfully sue for the shutdown of a Beltex Corp.-owned horse slaughter plant near Fort Worth and a Dallas Crown plant in Kaufman.

Beverly Boyd, spokeswoman for the agriculture department, said the agency's pens are a rest stop for animals headed to Mexico and South America.

She said the agency is required by law to accept all animals as long as state and federal laws and the department's pen policies are being followed.

Animals eat, drink and rest at the pens after traveling hundreds of miles (kilometers). They also are checked by Mexican veterinarians before being shipped south. The agency has several pens along the border for exporting livestock to Mexico.

"A lot of these animals going into Mexico or Canada have traveled a long distance. You don't want them on the trucks all the time," Boyd said.

About four to six trucks carrying approximately 30 horses each were arriving at the state pens at the time, said Kathy Milani, The Humane Society of the United States' vice president for investigations and video.

The loads were being delivered by Beltex Corp. Beltex also runs a Panhandle feedlot in Morton, Texas, about 300 miles (483 kilometers) northeast of Socorro. Truck drivers also told the animal protection group's employees they had driven from Morton.

Beltex did not respond to phone messages requesting comment.

The horses arrive at around daybreak, some with injuries. In early afternoon, Mexican trucks arrive at the pens to load the horses and take them to Mexico, she said.

Some horses are walked across the border at nearby Santa Teresa, New Mexico to San Geronimo, Mexico. They are loaded into double-decker cattle trailers that the U.S. has outlawed and driven further into Mexico, Milani said.

Opponents of efforts to ban horse slaughter had warned during previous congressional debates that closing the plants in the U.S. would lead to the export of horses into Mexico and Canada.

"The U.S. plants had, certifiably so, the most humane way to end the life of unwanted horses available to those horse owners who did not object to horse slaughter and we turned our back on it," said Charlie Stenholm, a former Texas congressman who now lobbies for the horse slaughter industry.

"Now we are transporting horses hundreds of miles and it's all because some people object to horse slaughter," he said.