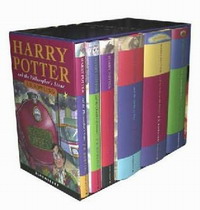 Rowling rarely signs books, and the copies being auctioned are the only known signed complete set in the United States.

The seven-book set, donated by Rowling, is the only item that can be bid for online.

The fundraiser, emceed by TV talk-show host Jay Leno, is scheduled for Oct. 26.

The money raised will help the press produce Braille books for children.