Valentino's last ever ready-to-wear show won a standing ovation from supporters who paid tribute to the king of red carpet dressing. 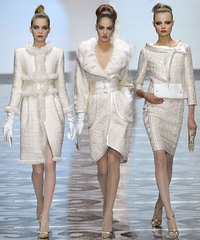 The collection was not quite Valentino's last hurrah - a final haute couture display is scheduled to take place in Paris in January. But the emotion was palpable as he blinked back tears on the catwalk, and backstage there was hardly a dry eye.

"I want to stop at the height of my glory," the 75-year-old designer said amid a scrum of cameras and reporters. "I want to have a bit of fun because I have spent my life stuck in couture houses drawing hundreds and hundreds of sketches every season."

Having celebrated his 45 years in fashion with three days of glittering celebrations in Rome, Valentino announced last month that he would retire in 2008. Alessandra Facchinetti, the former designer of Gucci women's ready-to-wear, has been appointed to replace him.

Talk of his imminent departure dominated the third day of the Paris spring-summer ready-to-wear shows, which also featured displays by Karl Lagerfeld, Christian Lacroix and Givenchy.

Valentino said he wanted his collection to be young and joyful as a tribute to all his fans - and maybe to show the new owners of his label, private equity firm Permira, what they will be missing.

To a thumping soundtrack of Prince songs, models stepped out in flirty cocktail dresses scattered with polka dots and gold bows. Blocks of color formed graphic patterns that had an upbeat '80s feel, while a print of oversized arum lilies added a romantic touch.

Fashion editors and retailers praised the legendary designer, who has dressed luminaries from Jackie Kennedy to Gwyneth Paltrow and shares their glamorous lifestyle.

"I am not very pleased because I think it is not good that he's stopping - he is in great shape," the ponytailed designer told reporters after showing his Karl Lagerfeld line earlier in the day.

"It's in the order of things to change. If I had a fit every time a designer changes, I would be in hospital," she wryly remarked.

Valentino doesn't plan to disappear entirely. Besides setting up a foundation to house his creations, he wants to create costumes for opera and ballet shows.

Lagerfeld, on the other hand, said he had no intention of stepping down from his multiple roles as creative director of the Lagerfeld, Chanel and Fendi brands. "All my contracts are for life, so I am like a death row inmate," he joked.

Though he staged his show on a rainbow-colored catwalk, the outfits were mostly in his trademark black and white.

Black leather mini skirts were worn over see-through chiffon pants, while an oversized white dress shirt with a stiff collar flared out over layers of petticoats for an A-line silhouette.

By contrast, Lacroix let loose a riot of color with bustier dresses in retro floral prints or brushstroke patterns set off by jaunty cartwheel hats and straw boaters covered in silk scarves.

The designer said he would be curating the annual Arles Photo Festival next summer and had been delving into images by 1940s American fashion photographers like Louise Dahl-Wolfe.

"These girls who are both sophisticated but dressed for the beach really impressed me," he said.

At Givenchy, Italian designer Riccardo Tisci showed black leather jackets and coats that were stamped with metal rivets - some the size of saucers - and paired with gladiator-style lace-up stiletto shoes.

Industrial zips crisscrossed the front of a black chiffon dress with see-through panels, while large black messenger bags were strapped to the small of the back with wide belts.

The moody show was at odds with the frothy romanticism seen elsewhere this season, but fans of the designer's Gothic sensibility - like front row guest Courtney Love - surely will not mind.