Prosecutors closed a drug-and-gun case against Jadakiss, the rapper who once wrote controversial lyrics about the attack on the World Trade Center. 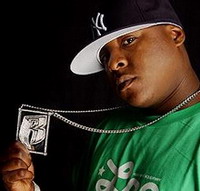 His lawyer said it was "a travesty that the case went this far."

The Westchester County district attorney's office asked a judge last week to dismiss the charges against Jadakiss, whose real name is Jason Phillips, and a co-defendant, Kristian Smith.

Phillips, Smith and Darnell Frazier were arrested last October in Yonkers, the rapper's hometown, and indicted in February. Police claimed they smelled marijuana coming from the men's car and then found a gun inside.

A jury last month acquitted Frazier after DNA tests did not link any of the three to the gun.

Jadakiss' attorney, Clement Patti, said the rapper "has had this cloud over his head for a year, affecting his career."

Jadakiss' 2004 song "Why" included lyrics asking "Why did Bush knock down the towers?" He said later it meant the president had failed to stop terrorism.

The dismissal becomes official after the prosecutor's motion is granted by the judge.