Federline takes on leading role in upbringing of kids 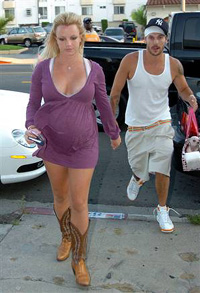 Federline takes on leading role in upbringing of kids

Kevin Federline is a loser as a rapper, but now the 29-year-old former backup dancer finds himself with a leading role in the upbringing of their kids.

K-Fed is now a full-time father after a judge ordered Britney Spears to temporarily surrender custody of the couple's sons - Sean Preston, 2, and Jayden James, 1 - to Federline.

The one-time rapper's custodial gains may have more to do with Spears' decline than his own parenting skills. The 25-year-old pop star failed to produce a California driver's license and allegedly missed a drug and alcohol test as ordered by the court, her lawyer, Sorrell Trope, said Tuesday.

How well the children will fare with Federline remains to be seen.

The 29-year-old father of four left his girlfriend, Shar Jackson, just months after she gave birth to their son, Kaleb. (Federline and Jackson also have a 5-year-old daughter, Kori.)

Federline first met Spears in passing in 1999 when he was a backup dancer for a boy band. The pair married in October 2004, quickly had two children and split just after their second son was born. (Spears filed for divorce last November and it became official in July.)

That track record aside, Dorian Traube, a professor of social work at the University of Southern California, said: "Lately, he's really kind of stepped up as a father. We don't hear much about how he parents his other kids. But with his children with Britney, he's gone to great lengths to keep them out of the public eye and he's gone to great lengths to keep the grandparents involved."

A hearing was scheduled Wednesday for more custody proceedings between Spears and Federline.

While Spears made her now infamous appearance on the MTV Video Music Awards, Federline hosted a birthday party for the couple's two boys. Spears bounces between houses and high-priced hotels, while Federline keeps a home in the family-oriented suburban community of Tarzana, California.

"He recently put a safety fence around his pool," said Traube, who has followed the couple's ups and downs closely through news reports. "He is genuinely worried about the welfare of his children and what they might be experiencing when they're with their mother."

It is a change from a year ago, when Federline was a party-circuit regular preparing to release his debut album. Even then, though, he talked about waking up with his children, tucking them in at night and building a home studio so he could stay close to them.

"I would just work out of my house the whole time and I could spend as much time as I needed to spend with my children," Federline told The Associated Press in October 2006. "But it's still never enough."

Spears has been spiraling downward since she and Federline split. She was photographed without underwear and appeared to be drunk and out-of-control. Then she shaved her head, beat a car with an umbrella and ended up spending a month in rehab.

Monday night, after learning she would lose custody of her kids indefinitely, Spears showed up for a stay at a posh Beverly Hills hotel.

"Hopefully this will be the impetus for some positive change for Britney, and then for the kids as a result," Albright said. "It's really unfortunate because the kids are the ultimate victims."