A tailor accused of breaking into Nicolas Cage's coastal home was charged Tuesday with residential burglary. 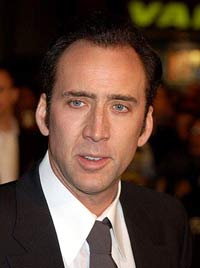 Furo, who remained jailed on $50,000 (EUR35,300) bail, faces up to six years in state prison if convicted, Emami said. A call to the county public defender's office, which was assigned to represent Furo, was not immediately returned.

Cage called a security guard at his gated community around 1:30 a.m. Monday after he saw a man wandering inside his home and wearing one of the actor's jackets, police Lt. Craig Fox said.

Cage was upstairs with his wife and son, and reported seeing the man standing at the door of a bathroom.

"He was standing there naked - except for the leather jacket," Fox said.

The guard called police, and when officers arrived Cage had already asked the man to take off the jacket and escorted him outside "without struggle," Fox said.

Furo was to return to court Oct. 10 for a preliminary hearing.

Cage, 43, won an Academy Award for his role in "Leaving Las Vegas." His film credits also include "Wild At Heart," "World Trade Center," "Adaptation" and "City of Angels."