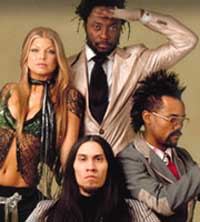 "It feels good to be able to help the youth because at one point in time we were teenagers that loved getting involved with the arts and there wasn't really that many programs in East L.A., where I'm from," Will.i.am, the band's front man, said at a news conference before the show at Mexico City's National Auditorium.

He added that his mother, a teacher at a California school with a large immigrant population, is proud of his charity work.

Proceeds from the concert will fund educational programs for some 1,500 children according to the group, which recorded such hit albums as "Elephunk" and "Monkey Business."

"Being in Mexico is special to all of us, being from Southern California," singer Fergie added. "They call Will a "blaxican" because he grew up with all Mexican friends and family. Taboo, of course, being of Mexican heritage. My great-grandmother is from Guanajuato (Mexico), and (Apl.de.ap) just loves the Spanish women, the Mexican women."

Band members said they hope to work with Latino artists such as Shakira, Mana, Joan Sebastian, Alejandro Fernandez, Molotov or Los Tigres del Norte in the future, but declined to discuss reported talks on a possible collaboration with the Mexican pop sensation RBD.