The Topps Meat Co. facility is under investigation after the reports that at least 21 people in eight states may have fallen ill after eating bacteria-tainted hamburgers. 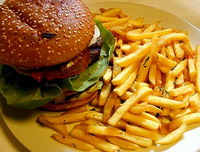 The U.S. Department of Agriculture is looking into what controls the Elizabeth-based company has in place to protect against E. coli, agency spokeswoman Amanda Eamich said.

She declined to comment further, saying only that the investigation was ongoing.

A spokeswoman for Topps, the leading U.S. maker of frozen burger patties, did not immediately respond to a request for comment.

E. coli causes intestinal illness that generally clears up within a week for adults but can be deadly for the very young, the elderly and people with compromised immune systems. Symptoms can include severe stomach cramps, bloody diarrhea and, in extreme cases, kidney failure.

The Centers for Disease Control and Prevention said Wednesday that 21 people in eight states may have fallen ill after eating the hamburgers. Illnesses were reported in Connecticut, Florida, Indiana, Maine, New Jersey, New York, Ohio and Pennsylvania.

A full list of the recalled products is available at http://www.toppsmeat.com.