Avian influenza that is not harmful to humans has been confirmed at a large chicken farm in Regina, Saskatchewan. 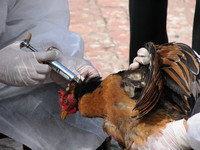 The flu is the H7N3 strain - the same one behind a 2004 outbreak in British Columbia that saw 17 million chickens destroyed, but not the strain dangerous to humans, said veterinarian Dr. Sandra Stephens during a press conference in the city.

The farm in question, Pedigree Poultry at Regina Beach, breeds chickens that produce fertilized eggs for other farms. These eggs will be hatched at another facility, but Stephens told reporters that the virus could not be carried by chicks born from those eggs.

None of the animals from the farm got into the food chain. Even if they had, the disease does not make the meat unsafe for humans, said Stephens.

"It is important to remember that neither this nor any other AI (avian influenza) virus increases risk to food safety when properly handled."

The chicken farm is about 40 kilometers (24 miles) north of Regina and has been quarantined since Wednesday.

Stephens emphasized that the CFIA is handling the outbreak in accordance with international standards.

All 50,000 birds on the farm will be destroyed using carbon dioxide gas and will be either composted or buried deep in the ground. Barns, tools, vehicles and equipment will be disinfected.

Stephens said it is too early to pinpoint the source of the infection, although she suggested it may have been introduced by wild waterfowl such as ducks or geese.

Two people were infected in the 2004 outbreak, but they suffered only mild flu-like symptoms.

"We do recognize that there is potential with avian influenza viruses to have some capacity to produce illness in people," Stephens said. "Normally those conditions would be very mild."

Around the world, 200 people have died of avian flu since 2003, according to the World Health Organization.