It took the St. John's University 18 minutes to alert students via cell-phone text messages that a masked freshman came to campus with a loaded rifle sticking out of a bag. 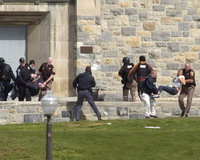 And when a suicidal gunman was reported to be on the loose at the University of Wisconsin, the school sent out mass e-mails and took out an ad on Facebook to warn students.

As the school year starts, colleges around the country are applying the lessons of the Virginia Tech massacre and using high technology to get the word out fast in a crisis.

"This was certainly a surprise. No one thought that we would be testing this latest technology this quickly for an emergency," said James Pellow, executive vice president of St. John's.

The 20,000-student Roman Catholic school in Queens activated its new text messaging system just three weeks ago. The scare came on the same day that the student paper ran a front-page story on the system, under the blaring headline: "In case of emergency."

This week's incidents at St. John's and UW-Madison - both of which ended without bloodshed - underscore how campus security has changed since Seung-Hui Cho killed 32 people on the Virginia Tech campus in April.

Cho shot his first two victims just after 7 a.m. More than two hours later, he massacred 30 people in a classroom building across campus. It was not until 9:26 a.m. that the school sent the first e-mail to students and faculty. An investigative panel concluded that lives could have been saved if alerts had been sent out earlier and classes canceled after the first burst of gunfire.

Since then, hundreds of schools administrations have installed text-messaging systems to communicate with students.

Omnilert, a company based in Leesburg, Virginia, saw its business surge after the Virginia Tech rampage. It is now supplying more than 250 colleges and universities around the country with instant messaging capability - a system called e2Campus.

St. John's purchased its inCampuAlert text-messaging system from a California company called MIR3 Inc. over the summer, also in response to the Virginia Tech slayings.

The system sends a message not only to cell phones, but also to digital signs in public places like student unions or dorms, as well as to computers, PDAs and beepers.

"Nearly every major college and university in the country is either in the process of implementing a text message warning system or seriously considering do it," said S. Daniel Carter, senior vice president of Security on Campus, a nonprofit organization based in King of Prussia, Pennsylvania, that pushes for safer college campuses.

School officials have not completely given up more traditional ways of communicating with students.

Last week, after two students were shot and wounded at Delaware State University, campus police and residence hall advisers knocked on doors and told students to stay in their rooms, and warnings were posted on the school's Web site and at dorms.

But it is clear that schools are taking advantage of every innovation they can.

In Wisconsin, officials paid the popular social networking site Facebook $100 (70 EUR) to post a flier on the UW-Madison social network. The ad asked users to click on a link for an update on the campus emergency. That took them to the university's home page, which carried the latest information on the search for a suicidal gunman. Authorities still had not located the man as of Thursday.

In the St. John's incident, text messages were sent so quickly that a student who helped subdue the suspect felt his cellphone vibrate with the information while he was restraining the gunman.

The message to student read: "From Public Safety. Male was found on campus with rifle. Please stay in your buildings until further notice. He is in custody, but please wait until the all clear."

The text messaging "worked like a charm," New York City Police Commissioner Raymond Kelly said a day later at a ceremony to honor the student, a police cadet, who helped restrain the suspect.

"Young people today are incredibly wired, and administrators have the technology at their fingertips - once they put it in place," said Amanda Lenhart, a researcher for the Pew Internet and American Life Project, a Washington-based nonprofit organization.

"What better way is there to get in contact with people who always carry technology, or are within shouting distance of it?" Lenhart said. "This is a huge development in terms of school security."