A dazzling collection of Roman statuary, treasures and everyday objects adorns the largest traveling exhibit ever mounted by the Louvre. 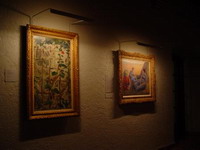 Augustus Caesar stands near his supposedly treacherous empress, Livia, in the opening room of "Roman Art From the Louvre," which runs through Jan. 6 at the Indianapolis Museum of Art.

A few feet (meters) away looms Tiberius, Livia's son from another marriage who, according to some accounts, became emperor only after his mother arranged several deaths, including Caesar's, to clear his path to the throne.

These royals, including the other men who ruled Rome from 27 B.C. to A.D. 68 - Caligula, Claudius and Nero - are rendered in fine white marble that still holds intricate details such as raised veins in their arms and the complex folds of their togas after 2,000 years.

"The Romans were just masters of stone and really not to be bested, if they ever were, until the Renaissance, which was inspired by finding things like this," said Martin Krause, the show's curator, pointing to a larger-than-life statue of the emperor Trajan.

Krause notes the painstakingly rendered features of leather on Trajan's military skirt and his ornate breastplate, decorated with animals and the bound figures of two captured barbarians.

The Louvre exhibit, which opened Sept. 23, is dominated by such statuary.

But its 184 works also hold spectacular mosaics assembled from thousands of pieces of colored marble, glass and limestone, gold jewelry, frescoes, glass vessels, bronze lamps and other objects dating from the first century B.C. to the early fourth century A.D.

Taken as a whole, the exhibit is about more than art. It is divided into sections that tell the story of the Roman world's religion, wars, intellectual life, families and funeral practices. One section even employs several busts to trace Roman women's changing hairstyles - from tight curls to free-flowing hair that looks almost modern.

Louvre President Henri Loyrette said most of the objects have never been seen in the United States, and half the works had long been in storage at the Paris museum.

Curators spent 3 1/2 years combing through the vast collection of Roman art the Louvre began amassing in the 16th century. Loyrette said most of the museum's Roman acquisitions were made in the 19th century, when Italy's treasures began flowing to European capitals.

The exhibit includes items unearthed in Pompeii and Herculaneum, the Roman cities in southern Italy buried by Vesuvius' eruption in 79 A.D. and rediscovered in the 18th century.

"This is the best collection of Roman art outside of Italy. Even for somebody coming from the Louvre and knowing this collection, there's a lot of discoveries to be made," said Loyrette, who visited the museum last week.

He said all the objects were restored for the exhibit. Some of the statuary, missing arms or legs when they were discovered, were fitted centuries ago with appropriate marble replacements. Those alterations are noted in the object descriptions.

Scattered throughout "Roman Art From the Louvre" are deities such as Jupiter and Athena, fantastic creatures such griffins - half bird and half lion - and golden jewelry worn by Rome's elite, such as earrings festooned with pearls and emeralds.

That jewelry is juxtaposed with mundane items such as dark orange terra-cotta plates that would have been used by Rome's less fortunate, perhaps even the slaves who built its wonders.

Patrons can get an idea of ancient Rome's grandeur by stepping into a darkened room where computer animated versions of the city's statue-lined streets are projected onto a large screen.

Among the sites they can wander through is the Roman Forum, the center of social, political and economic life in the city that at its zenith controlled an empire stretching from northern Britain to the deserts of Egypt.

Maxwell Anderson, the CEO of the Indianapolis museum, which completed a 165,000-square-foot (15,330-square-meter) expansion and renovation last year, said the Roman exhibit includes historical reliefs on a scale not seen in any other American museum.

In these works, sculptured figures rise from a carved background, all of it hewn from immense blocks of marble. He said some of the marble reliefs were taken from triumphal arches - the large structures that armies returning to Rome marched beneath.

Krause said many of the show's marble carvings, including one historical relief that weighs 3 tons, are so heavy they had to be fitted with special bases to spread their weight across the second-floor exhibition space.

"Without a doubt this is the heaviest exhibition we've ever done," he joked.