16:18
Putin wishes all the best to all foreign brand that left Russian market
15:55
Newsweek: US should not engage in nuclear standoff with Russia
14:36
Anti-Russian sanctions of the West suffer grand failure
13:57
Russia says US will face consequences for Nord Stream bombings
13:04
Ukrainian serviceman shoots Russian prisoner of war - Video
21:27
Limp Bizkit's new video has Putin as frontman singer while Biden is shown as demented guitarist
21:06
If Britain sends fighter jets to Ukraine, the whole world will deal with consequences
20:54
Russia ready to resume nuclear tests on Novaya Zemlya
19:53
Russia stunned at USA's Nord Stream blasts confessions

Extra energy will be required to avoid a nationwide blackout Friday when the final chapter of the hit soap opera "Tropical Paradise" airs. 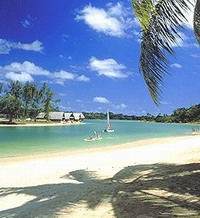 TV Globo expects that 90 percent of television viewers in the country of 186 million people will tune in for the final chapter to learn who murdered the scheming villain Tais and to find out if Bebel, the Pygmalion-like prostitute, will live happily ever after.

"We are worried about a possible blackout caused by a sudden surge in electricity at the end of the program," said a spokesman for the electricity company, who spoke on condition he not be named, in accordance with department policy.

"When it is all over, millions of people will get up from their armchairs and sofas to turn on the lights of their living rooms, open the refrigerator for a cold beer or heat a meal in the microwave oven," he said.

He said extra generating capacity is customarily geared up for during soccer games and other programs that attract large audiences.

Prime-time soap operas known are telenovelas, with average runs of 200 episodes, are hugely popular in Brazil. Their plot lines often become front-page news and the heroes and villains are major topics of conversation.