A byuer has lost a lawsuit over a small landscape painting by Paul Gauguin which was appraised at millions of dollars above its value by a well-known dealer. 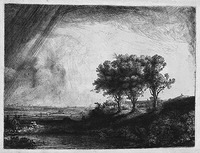 State Supreme Court Justice Emily Jane Goodman said in a ruling made public Thursday that the buyer could not show that the Manhattan dealer, Guy Wildenstein of Wildenstein & Co., committed fraud, breached a contract, or had a legal duty to act in the buyer's best interests.

The painting, "Paysage Aux Trois Arbres," was finished by Gauguin in 1892. It was bought for $11.3 million (7.97 million EUR) in August 2000 by Mandarin Trading, a Bahamas-based company that the judge said wanted to buy fine art and sell it at a profit.

Mandarin said that after an art broker approached its parent company in July 2000 to propose purchase of the painting, Mandarin sought an appraisal. The broker recommended Wildenstein, who estimated its value at $15 million (10.58 million EUR) to $17 million (11.99 million EUR).

In the appraisal, the Wildenstein firm said it had once sold the painting - whose title in English means "Landscape with Three Trees" - but allegedly failed to state that it had ever owned it.

Wildenstein said it provided the appraisal to a third party not named in the suit, and had no contact with Mandarin, the judge wrote.

In August 2000, Mandarin Trading claimed that Peintures Hermès, a Swiss company allegedly affiliated with - or owned by - Wildenstein sent an invoice for the painting to Calypso Fine Art, an intermediary.

Mandarin accused the Wildenstein firm and Guy Wildenstein of fraudulent or negligent misrepresentation and omission, breach of contract, and breach of the implied covenant of good faith and fair dealing.

Steven R. Schindler, lawyer for Wildenstein, said Thursday, "We are gratified by the judge's ruling. We believed the case had no merit and the judge agreed."

Robert F. Brodegaard, lawyer for Mandarin, did not return calls for comment.

Gauguin, born in Paris in 1848, was a post-Impressionist painter whose brightly colored canvases have sold for more than $40 million (28.21 million EUR). He lived in Tahiti from 1891 until his death in 1903. He is famous for his depictions of Tahitians.