They have hoofs and are fetching sticks or chasing mice, but pygmy goats are now legally pets in Seattle. 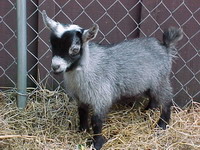 The City Council voted unanimously to reclassify the goats - also known dwarf or miniature goats - as small animals rather than farm animals after testimony touting the virtues of the dog-sized critters as companions, weed eaters and milk producers.

"One small step for man, one giant step for goatkind," council member Richard Conlin, who sponsored the measure, said after Monday's vote.

The little goats - up to 2 feet (60 centimeters) tall and weighing 50 to 100 pounds (22 to 45 kilograms) - must have pet licenses, just like cats, dogs and potbelly pigs. However, these pets must be dehorned and males must be neutered to reduce musky odors.

They are not allowed outside the owner's yard -but other people can borrow them for grazing.

The measure was suggested to Conlin by Jennie Grant, president of the Goat Justice League, which she says has 100 members.

She said a neighbor had complained about potential public health risks from her two pet goats, Brownie and Snowflake.

The goats "are happy, they have each other, they have enough space to do the things goats like to do," Grant said at a hearing last week. "Every day they harvest blackberry bushes. Every day Snowflake gives a half gallon of delicious milk. I make cheese and I bring it to the neighbors."

Try that with a cat or a dog.