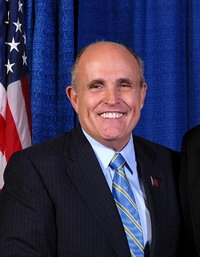 The IAFF union - already a vocal critic of Giuliani's - said Tuesday that the fundraiser's "$9.11 for Rudy" theme is an abuse of the image and symbols of the 2001 attacks.

"It is nothing short of disrespectful to the legacy of the thousands of civilians and 343 brave firefighters who died at ground zero," IAFF president Harold Schaitberger said, referring to the site in New York where the twin towers collapsed Sept. 11,2001 after terrorists crashed hijacked airplanes into them.

Giuliani was mayor of New York during the Sept. 11 attacks and he has made anti-terrorism part of his presidential campaign.

Democratic presidential candidate Chris Dodd criticized the fundraiser with a statement from his campaign calling the theme "unconscionable, shameless and sickening."

A Giuliani spokeswoman said the $9.11 idea was selected without the campaign's knowledge.

"These are two volunteers who acted independently of and without the knowledge of the campaign," Giuliani spokeswoman Maria Comella said. "Their decision to ask individuals for that amount was an unfortunate choice."

Giuliani supporter Abraham Sofaer is slated to hold the fundraiser at his California, home on Wednesday, when Giuliani backers across the United States are participating in the campaign's national house party night.

"There are some young people who came up with it," Sofaer said when reached by telephone Monday evening. He referred other questions to Giuliani's campaign.

"I'm just providing support for him. He's an old friend of mine," Sofaer said.

Sofaer was a State Department adviser under President Ronald Reagan and is a fellow at Stanford University's Hoover Institution. Federal election data indicates Sofaer has given nearly $50,000 (35,445 EUR) to Republican causes and candidates, including Giuliani, since 1995.

According to the invitation, "$9.11 for Rudy" is an "independent, non-denominational grass-roots campaign to raise $10,000 (7,090 EUR) in small increments to show how many individual, everyday Americans support 'America's Mayor."'