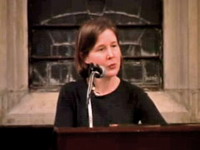 The same sorts of collisions happen again in her new novel, "Run," which goes on sale Tuesday, but this time expectations for Patchett's book are much higher among readers and booksellers.

That is because "Run," her fifth novel, will be the first since "Bel Canto," the book-club sensation that sold more than 1 million copies in the United States. It won the PEN/Faulkner Award in 2002 and was a finalist for the National Book Critics Circle Award.

"Bel Canto" told a dreamy story of terrorists taking guests hostage at an unnamed embassy somewhere in South America. Over the course of the book, the captive audience is drawn together by nightly recitals from an American soprano.

In the latest novel, "Run," a white Irish Catholic former Boston mayor and his sons - two of them adopted black brothers - literally collide with a black woman and her 11-year-old daughter.

Patchett, 43, is a white Southern writer who lives in Nashville and loves Eudora Welty, but her books are rarely set in the South and they do not deal with themes that are identifiably "Southern."

"You write about what's interesting to you," she says in an interview at her home. "It's all about holding my own interest. It can take me years to write a book so it's really important I write about things I find compelling and challenging and not things I completely know and understand, or writing the same things over and over again, because it would be too boring. I wouldn't be able to stick with it.

"So I think I'm always kind of trying to push myself farther afield. I'm very interested in politics ... the intersection of wealth and poverty, which comes up in 'Bel Canto' and again in 'Run.' So it's really about that, and not, 'Wow, something happened to me in my childhood and that's why I do this."'

In "Run," Patchett wanted to show the common ground between the rich and poor and how family can extend beyond blood relations.

"I think it's a book about politics and social responsibility and family values ... taking care of your community," she says.

Author Allan Gurganus, who wrote the novel "The Oldest Living Confederate Widow Tells All" and taught Patchett when she was a student at Sarah Lawrence College, says Patchett's books appeal to readers because they ask important ethical questions.

"We all feel besieged and confused by lack of leadership in the public realm. We're looking for leaders. And I think fiction can provide that. I think fiction ... can ask huge ethical questions that are not being asked by Democrats or Republicans," he says.

Patchett's first two novels - "The Patron Saint of Liars" and "Taft" - also won numerous accolades. And her third novel, "The Magician's Assistant," was short-listed for the Orange Prize (which celebrates excellence for books written in English by women) and earned her a Guggenheim Fellowship.

But it is Patchett's "Truth & Beauty" - a memoir that tells the story of Patchett and her friend, Lucy Grealy, who struggled with cancer and drug addiction - that stirred up the most controversy. Last August, after Clemson University made the book required summer reading for incoming freshmen, some said it glamorized deviant behavior and had inappropriate sexual content.

Patchett, who was scheduled to speak at the school weeks before the controversy erupted, showed up and told students to not let anyone ever tell them what they're allowed to read. When students asked questions, some in the South Carolina community attacked the book and her. One asked how many times Patchett cheated on her husband.

Still, she says, "Clemson was great and they (school officials) stood behind me. The people who started the protest were not directly involved with the university. I think it was a small group of people who made a whole lot of noise.

"If something is offensive to someone, then it's offensive. I understand different people find different things offensive. But what was troubling is I was invited to come and speak at the school. And so that was hard to go in some place as a guest, where you feel like you know what's going to happen, and then have all of this upheaval."

It was the first time her book had generated such a negative response, she says, noting that in 2005 it received an award from the American Library Association as the adult book most appropriate for high school readers.

Patchett was born in Los Angeles in 1963, but moved to Nashville when she was nearly 6 with her mother and sister after her parents' divorce. After graduating from Sarah Lawrence, she attended the University of Iowa Writers' Workshop, where she completed her master in fine arts degree in 1987. She moved several times during her 20s, writing and teaching in various states, until landing in Nashville when she was 30 and eventually marrying her husband, surgeon Karl VanDevender.

Patchett, a luminous blonde with fair skin, lives in a three-story brick home filled with antiques on a shady, tree-lined street and remains close to her family; her mother and stepfather also live in Nashville. And in her sunny office where she writes, she has surrounded herself with pictures of her family and pet dog Rose.

There is also a photo of Eudora Welty, who moved back home to Jackson, Mississippi, to be close to her family.

Patchett says she is inspired by Welty, who despite relocating home to take care of family was able to create great art, too.

Wherever she is, Patchett's friend and mentor Gurganus knows nothing will ever keep her from writing.

"I think I was about 27 and teaching freshmen at Sarah Lawrence," he recalls. "Ann was 18 and walked in and said, 'I want to be a writer.' What she meant was I want to continue to write, because she had already been writing most of her life."