Jennifer Garner can pretty well balance her career with motherhood

Actress Jennifer Garner is grateful that she can balance her career with motherhood. 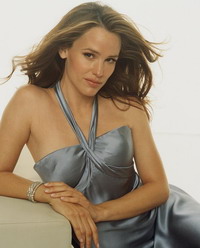 Jennifer Garner can pretty well balance her career with motherhood

"My job is great to have as a mom," she tells Marie Claire magazine in its October issue. "I get to take long breaks and then work hard in a really concentrated way."

"She's pretty awesome. We're in that sweet spot before the `terrible twos,"' the 35-year-old actress says. "We definitely wonder what it would be like to have another - hopefully, knock on wood, someday."

Garner nursed Violet during the filming of "The Kingdom," costarring Jamie Foxx, which opens in theaters Friday. Garner says she found herself staggered by the heat on the Arizona set.

"I checked with a pediatrician, I checked with my gynecologist," she recalls, "and they said, `Breast-feeding? You'll be fine. Just drink plenty of water.' But the rules when it's 138 degrees (59 degrees Celsius) are different. ... It sent me to the hospital a couple of times."

"I guess I was getting heatstroke," she says. "All my electrolytes were going to the baby - I wasn't keeping any of the potassium in my body."

"I made it through, though," says Garner, who nursed Violet for 14 months. "I really didn't want to give up, and I didn't."

She debuted her postpartum figure at the 2006 Oscars wearing a beaded designer gown.

Such an outing is not stress-free, Garner says.

"I usually feel like, `No matter how many girdles you put me in, you will not be able to zip this.' They always say to you - as though it's something that should make you happy - `This is fresh from the runway.'

"But what I think is, `That was made for some 14-year-old girl from Russia! It was not made to go on my body."'