More than 120 people arrested and dozens of steroid labs uncovered in an international investigation into the illicit trade of performance-enhancing drugs. 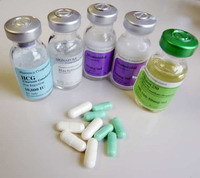 The Drug Enforcement Administration said the investigation, dubbed Operation Raw Deal, was assisted by governments of nine other countries, including China.

In the U.S., agents seized 56 labs that manufactured anabolic steroids and human growth hormone, the DEA said. Agents seized 11.4 million doses of drugs in all.

Among those charged, federal authorities say, are a Chinese manufacturer accused of smuggling human growth hormone into the country and four men who allegedly distributed drugs through a MySpace.com profile.

The seizures and arrests follow a growing number of scandals in American sports leagues over steroid abuse, but federal authorities in the state of Rhode Island said no professional athletes were directly involved in the investigation.

DEA spokesman Michael Sanders said 143 federal search warrants were issued during the 18-month investigation, many of them since Thursday. The FBI, Internal Revenue Service, U.S. Immigration and Customs Enforcement and the Food and Drug Administration were also involved.

In the state of Connecticut, four men were charged with purchasing raw steroid powder from China, manufacturing anabolic steroids in home laboratories and distributed them to customers through a MySpace.com profile and a Web site.

A Chinese corporation and its chief executive were indicted in Rhode Island on federal charges of smuggling illegal human growth hormone into the country in connection with the operation.

"China really stepped up to the plate to help us in this investigation," DEA spokesman Garrison Courtney said in Washington.

The federal grand jury in Rhode Island indicted Genescience Pharmaceutical Co. and its CEO, Jin Lei, last week on charges including money laundering and conspiracy to facilitate the sale of smuggled goods. Jin is accused of marketing the drugs, under the brand name Jinotropin, through e-mail and Web sites.

Jin, who authorities say has an address in Madison, Wisconsin, is believed to be living in Shanghai and is not in custody.

"Even though their storefront is the Internet, rather than the street corner, the people who engage in the smuggling and distribution of these substances are drug dealers, plain and simple, and we will treat them accordingly," U.S. Attorney Robert Clark Corrente said.

In all, investigators seized over 225 kilos (500 pounds) of raw ingredients for steroid manufacture that originated in China.

Other countries participating in the investigation were Mexico, Canada, Australia, Belgium, Denmark, Germany, Sweden and Thailand.

Police in Denmark raided 26 locations across the country. Germany's Federal Criminal office said its agents closed five illicit labs and confiscated tens of thousands of illicit tablets and capsules as part of searches carried out in five of the nation's 16 states.

Danish police were able to see the China link in the investigation through money transfers between a buyer and a Chinese seller, said Joergen Isalin of the Denmark National Police investigative center.