Photographer Oliviero Toscani's latest shock ad campaign was expressed in an advertisement for an Italian fashion house with the headline "No anorexia." 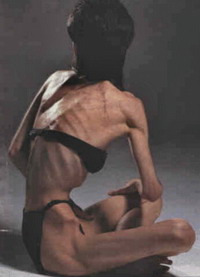 The ad had its premier Monday, at the start of Milan's fashion week, and was featured in a two-page center spread in the daily La Repubblica and other newspapers as well as on billboards around the country.

Toscani, best known for provocative ads for the Benetton clothing company featuring death row inmates and people dying of AIDS, was commissioned to shoot the ad by Flash&Partners, which puts out the fashion label Nolita.

"Toscani literally stripped his subject, to show everyone through this nude body the reality of this illness, which in the majority of cases is caused by stereotypes caused by the fashion world," Nolita said in a statement on its Web site.

The fashion industry has been in the spotlight about anorexia since the 2006 death of a 21-year-old Brazilian model who died from the eating disorder.

A fashion manifesto initiated by the Italian government and signed last year by representatives of the Italian fashion chamber called for regulations on age and weight for models participating in the myriad of fashion events held in this country year round.

Organizers of the London Fashion Week issued a report earlier this month saying models should be 16 or older and should be screened for eating disorders, although the British Fashion Council stopped short of recommending a ban on ultra thin models.

The subject of the Toscani photo, a 27-year-old French woman named Isabelle Caro, says on her blog that she is a comedian, and has suffered from anorexia since she was 13 because of a difficult childhood. She says she wants to get better because she loves life.

While fashion designers largely praised the campaign, groups working with anorexics said it actually did a disservice to those afflicted with the disorder. ABA, the Italian association against anorexia, bulimia and obesity, said the "devastating" image risked making women want to emulate Caro to get publicity and visibility, the ANSA news agency reported.

Toscani himself said on the Nolita site that it was significant that a fashion house was willing to confront the issue with what he called a "courageous" campaign.

Giorgio Armani, who presented his Spring-Summer 2008 show Monday, said the campaign - while using a "harsh and crude" image - was "correct, opportune," ANSA said.

Designing duo Domenico Dolce and Stefano Gabbana also praised the ad, but said it showed that anorexia was not just a problem of the fashion world. "Finally, someone says the truth about anorexia, that it's not a fashion problem but a psychiatric problem," ANSA quoted the pair as saying.

Italy's health minister, Livia Turco, praised the campaign, saying it was a complicated illness that can afflict anyone.