Hollywood star George Clooney and his new girlfriend Sarah Lawson found themselves in the hospital after the motorcycle they were riding was hit by a car in New Jersey. 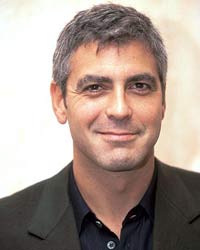 The crash was confirmed by the actor’s rep, who revealed that while Clooney suffered a hairline fracture of a rib and road rash, Larson was left with a broken foot.

According to the police, the couple met with the accident when a 1999 Mazda Millenia that allegedly attempted to make a right turn from the left lane crashed into Clooney’s Harley-Davidson at 3:30 p.m, reports People magazine.

However, the Mazda driver, identified as Albert Sciancaledore, 27, insisted that it was Clooney who was trying to pass cars in the right lane, reports Times of India.

Sciancalepore, who also won't be charged, was fined for not having his registration with him at the time of the accident, Welz said.

Clooney was apparently coasting on the boulevard to enjoy an unobstructed view of the Manhattan skyline with Larson, a former "Fear Factor" winner.

Clooney had been in New York shooting the dark comedy "Burn After Reading," co-starring his buddy Brad Pitt and John Malkovich, The Jersey Journal reports.