The woman who claims she is the oldest daughter of James Brown said she will be in court Monday to pursue a piece of the late soul singer's estate. 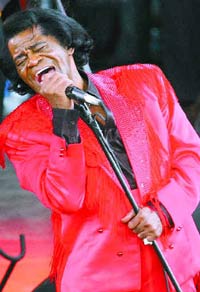 "I've been walking around looking like this man for 45 years," said LaRhonda Petitt, a retired flight attendant and school teacher. "I'm not talking no negative talk, I'm talking about what's right."

A judge is scheduled to go over pending issues in the ongoing court battle over Brown's will, said attorney Jim Griffin, who represents Petitt.

Brown died Christmas Day of heart failure at age 73. His will, which is being disputed, names six adult children. But at least three other people, including Petitt, say DNA testing proves they are his children.

Petitt, who was born and lives in Houston, said Sunday she would like all people claiming to be Brown's children to take a DNA test. "Just because they're in the will doesn't mean they're all my daddy's children," Petitt said.

An attorney for those named in his will and a trustee for the estate did not return phone calls Sunday seeking comment.

Petitt has filed a paternity action to legally establish that she is Brown's daughter, Griffin said.

"He had kids everywhere," Petitt said. "And each one of those kids can do something positive."

She also has two claims against his estate, one to share in the estate as a natural child who was not provided for by the will and a second claim for back child support.

Griffin said those issues won't be discussed in court Monday.

Petitt said she also would like to see Brown's body moved to a mausoleum so family and friends can visit more easily. His body has been entombed in a crypt at the home of one of his daughters since March.