All combat roles must be opened to women, Israeli stady says 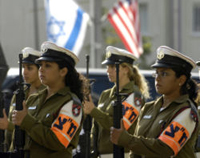 All combat roles must be opened to women, Israeli stady says

The military said the draft report by a panel of officers and academics was a tool for long term-planning meant to "maximize the abilities of the women for the overall benefit of the armed forces." It did not have details of the report's recommendations.

Israel Radio reported that the commission, set up by the head of the army's human resources department, proposed that women no longer be excluded from any unit because of their gender, and that men and women drafted for Israel's compulsory military duty should serve for the same length of time.

At present men are usually conscripted for three years and women for two. Arabs and ultra-orthodox Jews are exempted.

Retired general Yehudit Ben-Natan, who headed the now-defunct Women's Corps, said she had long championed total integration of women in the military and rejected arguments that women should be kept out of the front line because they might be, hurt, taken prisoner or forced to work in uncomfortably confined spaces with men.

"The heart and soul of the army is combat and if we are in the army we need to be at its heart," she told the radio. "Let there be tanks with all-female crews and all-woman missile batteries, because we can do it and we must stop allocating duties by gender."

During last summer's Lebanon war, a small number of women soldiers fired artillery, served on naval vessels and flew combat sorties as pilots and weapons system operators. All told, around 1,500 women serve in combat jobs - some 2.5 percent of female conscripts, according to army figures.

Sensitive to charges of sexual harassment or misconduct, the military has made strict separation of barracks and bathrooms mandatory.

Some Orthodox Jews protest that mixing the sexes still goes in the face of religious rules on chaste behavior. Other Israelis have voiced concerns that the public would not tolerate women being killed or falling captive.

But the death last year of flight technician Keren Tendler, whose helicopter was downed by Hezbollah guerrilla fire over Lebanon, did not draw a public backlash against women in battle, suggesting the concept has won broad acceptance.

Aerial combat was opened up to women following a successful petition to the Israeli Supreme Court in 1995.

Maariv newspaper reported Monday that one of the few women who graduated as combat aircrew in the late 1990s recently became the first mother to serve in the cockpit of an Israeli fighter plane, when she returned to reserve duty after giving birth five months ago.

Israel Radio said the new study recommended that women could only be excluded from a particular unit with the express approval of the defense minister and parliament's Foreign Affairs and Defense Committee. It said the committee urged the military to implement its recommendations within five years.

"This should have been done a long time ago," Ben-Natan said. "But better late than never."