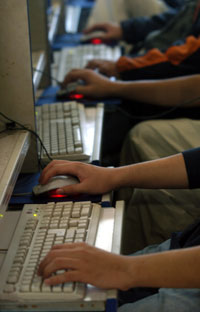 A three-day Internet gaming binge turned tragedy in China when a man had died of exhaustion, state media said Monday.

The 30-year-old man fainted at a cybercafe in the city of Guangzhou on Saturday afternoon after he'd been playing games online for three days, the Beijing News reported.

Paramedics tried to revive him but failed and he was declared dead at the cafe, it said. The paper said that he may have died from exhaustion brought on by too many hours on the Internet.

The report didn't say what the man, whose name was not given, was playing.

The report said that about 100 other Web surfers "left the cafe in fear after witnessing the man's death."

China has 140 million Internet users, second only to the United States. It is one of the world's biggest markets for online games, with tens of millions of players, many of whom hunker down for hours in front of PCs in public Internet cafes.

Several cities have clinics to treat what psychiatrists have dubbed "Internet addiction" in users, many of them children and teenagers, who play online games or surf the Web for days at a time.