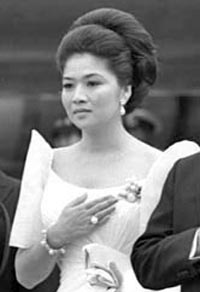 Imelda Marcos – a former first lady and an extensive shoes collection’s owner - was discharged from a hospital Monday after being treated for knee pain. She became just ecstatic when doctors advised her to get some orthopedic footwear.

"Now I have the justification to have more shoes," a beaming Marcos told reporters.

Marcos, 78, was admitted to a suburban Manila hospital over the weekend after she complained of pain in her knees and difficulty in walking, prompting her to cancel a court-approved trip to Hong Kong, her lawyer Robert Sison said.

Her doctors said she suffered from arthritis and advised her to lose weight and wear orthopedic shoes to help her walk easier. The thought of having more shoes thrilled Marcos, ABS-CBN TV network reported.

"The prescription of the orthopedic doctors was to have more shoes," according to Marcos. "And I said, 'sure."'

Wearing a formal dress and glittering jewelry, Marcos slowly walked out of the hospital, trailed by her doctors, to show TV cameramen and photographers she was well. She denied speculation she was rushed to the hospital because of a serious heart ailment.

"I have a commitment to keep my heart in good health," she said.

The wealthy socialite gained fame for her diamond-encrusted tiaras and the 1,220 pairs of shoes she left behind when she and her husband, dictator Ferdinand Marcos, fled the country after his 1986 fall from power.

Two Philippine courts trying Imelda Marcos for alleged corruption allowed her to travel to China and Hong Kong for two weeks this month after she agreed to post a travel bond of 950,000 pesos (US$20,300; EUR14,915), Sison said.

After attending a trade exhibit in China's northeastern province of Jilin early this month, Marcos complained of knee pain and difficulty in walking. She decided to forgo her trip to Hong Kong, where she was supposed to visit an eye doctor for glaucoma, and returned home on Sept. 5 to get local treatment, Sison said.

Marcos, a former congresswoman and an unsuccessful presidential candidate in 1998, has kept a low profile in recent years. She faces a string of criminal and civil cases related to billions of dollars (euros) allegedly amassed by her family during her husband's two decades in office.

The couple had denied any wrongdoing.

A "people power" revolt ousted Ferdinand Marcos in February 1986, forcing him and his family to flee to Hawaii, where he died in exile in 1989.