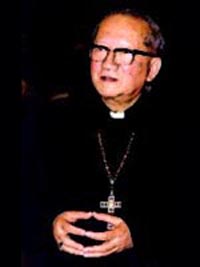 The beatification for a Vietnamese cardinal who spent 13 years in a communist prison camp before being sent in exile to Rome was supported by Pope Benedict XVI.

The pope met at his summer residence in Castel Gandolfo with members of the Vatican's Justice and Peace commission, which Cardinal Francois Xavier Nguyen Van Thuan headed, on the fifth anniversary of his death from cancer. The pontiff also met with relatives of the cardinal and representatives of the Vietnamese community.

Before becoming ill, the cardinal - an inspirational figure for Vietnamese Catholics - was considered a possible candidate to succeed the late Pope John Paul II.

Cardinal Renato Martino, who now heads the justice and peace office, announced over the weekend that Van Thuan was being proposed as a candidate for beatification, a process that can lead to sainthood.

Benedict said he welcomed the beatification cause "with intimate joy," praising the Vietnamese prelate as a "a man of hope, (who) lived from hope, and spread it to all those he met." The pope recalled Van Thuan's difficult years in his native Vietnam - including 13 years in a notorious "re-education" camp, nine of them in solitary confinement.

While in prison he was known for clinging to his faith and fashioning a Bible out of scraps of paper.

He was freed in 1988 and exiled, coming to the Vatican under John Paul, who later made him a cardinal.

Benedict also praised the patience with which Van Thuan faced his illness and death, "giving himself over totally to the will of God."

Martino named a woman lawyer, Silvia Monica Correale, as postulator - the official who promotes the cause. Five years after death is the normal time under Church law for a beatification process to begin. In rare cases this is waived, as was the case with John Paul.