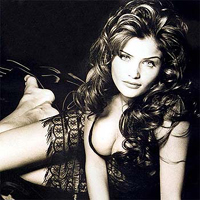 Supermodel Helena Christensen recently urged people to "do a good turn" – she took part in an environmental campaign. But one of her New York neighbors says the Danish model will not do the same in a dispute over a deck on her Manhattan apartment.

Fran Panasci sued Christensen Thursday in state Supreme Court in Manhattan, seeking to have the wooden deck torn down. Panasci says the deck, off the model's home on Hudson Street in the chic West Village, generates noise and vibrations and intrudes on her building on neighboring Charles Street.

"It blocks all light, all air, and it's damaging my client's building," said Panasci's lawyer, Elizabeth Harrington. She said Panasci had tried unsuccessfully to settle the dispute without going to court.

But Christensen's spokesman, Jason Deyonker, said the deck was legal and Panasci's complaints "have already been addressed." He said Christensen had tried to resolve Panasci's concerns over the past year and had brought in an engineering firm to make sure the deck would not cause trouble, the Daily News reported Friday.

Christensen, 38, became known in the U.S. after appearing in the atmospheric, black-and-white video for singer-songwriter Chris Isaak's hit "Wicked Game" in 1991. She co-owns a New York fashion and interior design shop, Butik.