15:06
New Russian territories to require new Russian Constitution
14:36
Russia pays attention to Poland's 'Thank you, USA' remark after Nord Stream accidents
14:22
US Embassy in Moscow urges Americans to leave Russia immediately
18:52
US helicopters fly above the sites of Nord Stream accidents
16:54
Referenda in Luhansk, Donetsk, Kherson and Zaporizhzhia regions completed
16:37
Anti-terrorist operation will give the upper hand to the Russian Army
15:03
Kremlin: Russia still ready for talks with Ukraine, but conditions have changed
13:30
Russian and Chinese warships spotted off the coast of Alaska
12:57
Global Times: The Fed causes world to experience 'economic earthquake'

Shakira, the Colombian pop star, has been attending the University of California, Los Angeles, this month. The singer, whose hips don't lie, attends the class called "Introduction to Western Civilization: Ancient Civilizations from Prehistory to Circa A.D. 843." 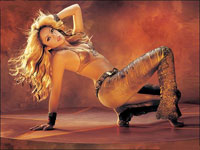 "She went when she finished her tour, for the summer," Shakira's manager Fifi Kurzman told The Associated Press.

Shakira began her studies Aug. 6. The course will  end Friday, according to UCLA's Web site. Its lecturer, Robert Cleve, could not be immediately reached for comment. For years Shakira, 30, has studied on her own, also taking tutorials on the history and languages of the countries she visits, Kurzman said.

The chanteuse, known for last year's "Hips Don't Lie" and other hits, released her first album at age 14 and later took time off to finish high school. She decided to take a musical rest this summer following her worldwide "Oral Fixation" tour to focus on social causes, Kurzman said.

Shakira has joined more than 30 Hispanic music stars in a campaign to benefit victims of the massive earthquake last month in Peru. Organized by Panama-based nonprofit Latin America in Solidarity Action, the campaign calls for public donations to the Red Cross.