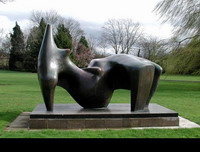 Polished totems, pointed ovals and reclining figures - 28 sculptures in all - have been installed at the 300-acre (120-hectare) World Heritage Site in Kew, south London.

Moore's striking shapes are framed by thousands of species of exotic flowers, tropical palms and towering pines at the former royal palace.

"This is the way he wanted it to be seen," said Anita Feldman, a curator at the Henry Moore Foundation.

Moore, who died in 1986, is quoted in the exhibition's program as saying "sculpture is an art of the open air."

"I would rather have a piece of my sculpture put in a landscape, almost any landscape, than in, or on, the most beautiful building I know," the artist said.

Moore's works are posted along a loose circuit through the leafy estate. Some installed at the center of clearings, others hidden in groves around the garden, inviting visitors to tramp through fields to find them.

Seen in a museum, the vast sculptures can be intimidating - huge and anonymous, many of his figures lying on misshapen trunks and wielding oddly truncated limbs.

But surveyed against the vast verdant backdrop of Kew's ancient trees, the statues shrink to a more human scale.

"I hope that the chance to see so many of Moore's sculptures together for the first time will draw visitors to Kew who might think they 'don't do' gardens or nature - and yet find much to enjoy," Hopper said.

Moore's "Large Upright Internal/External Form" - a 6.7-meter (22-foot) polished womb-like structure - dominates the vista close to Kew's 18th century Chinese pagoda. But, approached, it seems to retreat beneath the canopy of a nearby Phoenician cypress.

Across the garden, visitors slide their hands across the polished bronze or run fingers through the scores scraped into the statues.

"It's great to see people coming up and touching it," Feldman said as a small child clambered through a gap in one of Moore's powerful, fist-like forms. "It's very tactile and yes, it becomes part of the landscape."

As the seasons change through the six-month exhibit, the statues will take on new characteristics, Feldman said.

Already, the golden edges of Moore's snakelike "Two Piece Reclining Figure: Cut" were being flushed out by the blushing leaves of a scarlet maple.