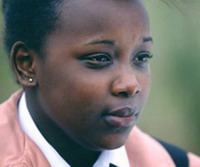 British directorial talent is represented by Nick Broomfield's "Battle for Haditha," an investigation into the killing of 24 civilians in Haditha, Iraq, and Richard Attenborough's "Closing the Ring," about a young man's quest to find the owner of a ring belonging to U.S. World War II bomber pilot.

The festival will host 184 full-length films and 133 shorts from 43 countries.