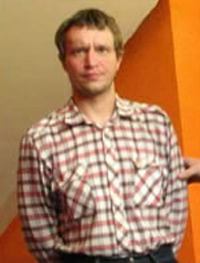 A man accused of killing dozens of people and keeping count of his victims on a chessboard paced back and forth inside a glass cage as a jury was selected Thursday at the start of his murder trial.

Alexander Pichushkin, 33, claims to have killed more than 60 people, with the goal of marking all 64 squares on the chessboard. He has been charged with 49 murders, most of them committed over the course of five years in a sprawling park on the edge of Moscow.

Pichushkin had requested a jury trial, which is relatively rare in Russia, and 12 jurors and six alternates were chosen Thursday. He looked calm and did not appear to object to any members of the pool.

The questioning of witnesses and presentation of evidence was to begin Friday. If convicted, Pichushkin faces life in prison.

In a police confession broadcast on NTV television shortly after his arrest last year, Pichushkin bragged about what he said was his passion for killing.

"For me, a life without murder is like a life without food for you," he said. "I felt like the father of all these people, since it was I who opened the door for them to another world."

The spate of killings in Bittsa Park in southwestern Moscow began in 2001 and terrorized the Russian capital. Most of the victims were men whom Pichushkin had lured to the park with the promise of a drink, investigators said.

About a dozen of their relatives attended Thursday's court session to get their first look at Pichushkin.

"Yes, my husband liked to drink," said a woman who gave only her first name, Elena. "And he (the defendant) would approach people who were drunk, and if they complained about life, he would kill them and throw them in a well."

"They must give him life in jail, so that he will suffer," said the mother of another of Pichushkin's alleged victims. The woman, who identified herself as Alexandra Grigoryevna, said they lived in the same neighborhood as Pichushkin and her son probably knew him.

Pichushkin killed more than 40 people by throwing them into a sewage pit after they were too drunk to resist, chief investigator Andrei Suprunenko said in an interview published this summer. Three others survived and one identified him, he said.

Pichushkin killed others by hitting them with a hammer, the investigator said.

He was arrested in June 2006 after police found his name and phone number on a piece of paper that a woman who was killed in the park had left for her son. He denied his involvement at first, but then confessed to the murder after police confronted him with video footage taken by a subway surveillance camera that showed him accompanying the victim, according to the authorities.

Pichushkin went on to confess to at least 62 murders and led police to the bodies of his victims, investigators said. Shortly after his arrest, police invited NTV to film and broadcast his confessions in an effort to counter speculation that he had been forced into making false confessions.

Pichushkin's state-appointed lawyer said Thursday that his client's mind was "a mystery" to him. "When you talk to him you can never imagine the things that he is accused of doing," Pavel Ivannikov said.

Pichushkin said in the televised confessions that he had killed his first victim, a classmate, in 1992 when he was 18. Police had questioned him then, but no charges were filed. The killings in Bittsa Park began almost a decade later.

Police found his chessboard with numbers attached to its squares, all the way to 62, and Pichushkin also used the chessboard to keep stoppers from bottles of vodka he offered his victims, said Suprunenko, the investigator.