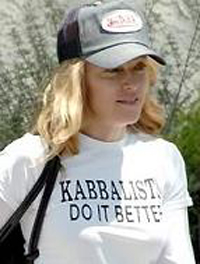 On the occasion of Jewish New Year Madonna joined with other devotees of Kabbalah, a Jewish form of mysticism, at a Tel Aviv hotel.

Madonna, who wore a shiny black zipper jacket and a red hat with a plaid brim, is attending a Kabbalah conference during a private visit to the Holy Land. The singer, who arrived in Israel on Wednesday night, did not speak to the media.

Madonna was raised a Roman Catholic, but she has become a follower of Jewish mysticism in recent years, raising the ire of many Orthodox Jews who see the adoption of Kabbalah by non-Jewish pop figures as an abomination.

The singer has taken the Hebrew name Esther, and has been seen wearing a red thread on her wrist to ward off the evil eye. During her visit she plans to visit sites sacred to Kabbalists.

Madonna paid her first visit to Israel three years ago, on another Kabbalah-centered trip.