Popular Hollywood actress Catherine Zeta-Jones plans to come to India with children in tow to shoot a movie with husband Michael Douglas, a newspaper reported Thursday. 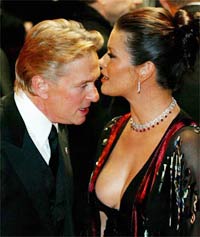 Zeta-Jones said she was working on the script along with Douglas, The Times of India reported.

"I'm looking forward to going to India," it quoted her as saying. "Michael and I are developing a script that will be set up in India. We will take our kids and all of us will come there, set up camp in India and shoot a film."

Douglas visited Mumbai two years ago and announced plans to co-produce and star in "Racing the Monsoon," an action adventure about a diamond heist aboard an Indian train.

The Welsh-born Zeta-Jones said she and Douglas live much of the year on the island of Bermuda, where their two young children go to school.

"The logistics are different now, I can't just take off anywhere because my kids go to school in Bermuda," the newspaper quoted her as saying. "If I work, Michael doesn't work and vice versa, that's our pact."

She did not specify when she would visit India or give details about the movie.

In her latest movie, "No Reservations," Zeta-Jones plays a chef whose life takes a twist when she becomes the guardian of a 9-year-old niece. She won a 2003 supporting actress Oscar for her role in the musical "Chicago" and also starred in "Ocean's Twelve" and "Traffic."