A U.S. appeals court will return to the notorious performance of pop singer Janet Jackson during the televised 2004 American football halftime show. The hearings will be held in an attempt of the federal government to regulate alleged indecency on broadcast TV. 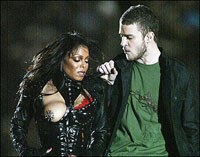 The 3rd U.S. Circuit Court of Appeals in Philadelphia will hear arguments about the 2004 halftime show, when 90 million Americans watched singer Justin Timberlake pull off part of Janet Jackson's bustier, briefly exposing her breast (PHOTOS). The episode was explained as a problem with her costume.

The FCC fined CBS Corp. $550,000 (EUR 400,000). CBS challenged the fine, claiming "fleeting, isolated or unintended" images should not automatically be considered indecent. The agency noted it has long held that "even relatively fleeting references may be found indecent where other factors contribute to a finding of patent offensiveness."

The case is being argued at a time when the Federal Communications Commission's enforcement regime regarding broadcast indecency is in a state of flux. The government is considering whether to take the profanity case to the U.S. Supreme Court. At the same time, Congress is working on a legislative remedy.

In the June case, the 2nd U.S. Circuit Court of Appeals rejected by a 2-1 vote the agency's polices on indecent speech. The case involved two airings of the "Billboard Music Awards," in which expletives were broadcast over the airwaves.

The court rejected the FCC's policy on procedural grounds but was "skeptical that the commission can provide a reasoned explanation for its fleeting expletive regime that would pass constitutional muster."

The U.S. Office of the Solicitor General, which argues cases on behalf of federal agencies, asked for a 30-day extension to decide whether it will appeal that case to the U.S. Supreme Court.

Meanwhile, in July, the Senate Commerce, Science and Transportation Committee approved the "Protecting Children from Indecent Programming Act," sponsored by Democratic Senators Jay Rockefeller and Mark Pryor. The act would require the FCC "to maintain a policy that a single word or image may be considered indecent."

Such a law would encompass both lawsuits neatly. But should it pass, it would not be retroactive. The American Civil Liberties Union said the bill "could have serious and damaging effects on the First Amendment," which protects free speech.

Indecency enforcement at the FCC is in a holding pattern. The FCC has not proposed a fine since March 2006.