Britney Spears looked bleary and unprepared kicking off the show Sunday night with her new single, "Gimme More." The former pop princess walked through her dance moves with little enthusiasm. She appeared to have forgotten the art of lip-synching. And, perhaps most unforgivable given her once-taut frame, she looked embarrassingly out of shape. 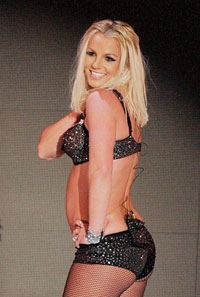 Even the celebrity-studded audience seemed bewildered. 50 Cent looked at Spears with a confused look on his face; Diddy, her new best friend, was expressionless.

Some comeback. Breathlessly hyped by MTV as the evening's most anticipated performance, it became the most shockingly bad of the night. Jive Records might want to push back that Nov. 13 album release date.

The VMAs had better luck with their own reinvention on Sunday. After suffering poor reviews and a decline in ratings over the last few years, MTV moved the show to Las Vegas' Palms Casino, shortened the show from three hours to two, and changed the show's setup to focus more on performances than awards. Justin Timberlake and Timbaland, Kanye West, Fall Out Boy and the Foo Fighters each hosted separate suite parties, where much of the show's performances were held.

Thankfully, after Spears' dismal start and an awkward, off-color intro by comedian Sarah Silverman, the show rebounded with several exciting performances. (There was even more drama in the audience: an off-camera fight broke out between Pamela Anderson exes Kid Rock and Tommy Lee, leading Diddy to remark: "It's not just the hip-hop artists that sometimes have a problem.")

Timberlake's suite was packed with revelers, alcohol and eight lingerie-clad stripper types on raised platforms. Before he accepted the Quadruple Threat of the Year award at his suite, the DJ summoned the partygoers to watch the monitor and go crazy if Timberlake won.

He did, they did, and Timberlake said: "I want to challenge MTV to play more videos!" Then he was whisked away by bodyguards and disappeared.

Timberlake was the night's big winner, with four trophies. After accepting the award for Male Artist of the Year, he jabbed at MTV again: "We don't want to see the Simpsons on reality television" - apparently he's not a fan of either Jessica or Ashlee's MTV shows.

Meanwhile, Rihanna won the coveted Video of the Year for her metallically inspired "Umbrella," and Monster Single of the Year for her ubiquitous hit "Umbrella," and Beyonce and Shakira won Most Earthshattering Collaborationfor "Beautiful Liar." Beyonce's shimmering gold dress barely contained her top; immediately after she picked up her trophy, she asked an assistant backstage to help fix her dress, apparently to prevent a wardrobe malfunction.

Other performers were appearing on the show's main stage, in front of an industry-only audience seated at tables, like at the Golden Globes. Chris Brown gave one of the evening's most extravagant performances - a dance-centric, eye-popping spectacle that channeled Michael Jackson, right down to a brief "Billie Jean" imitation.

Alicia Keys had the evening's most rousing performance, debuting her new song "No One" and then an inspired, choir-backed cover of George Michael's "Freedom."

While performances like Keys and Spears were delivered on the main stage, others were delivered in snippets: Akon crooned a bit of his "Smack That" before an award was announced, while the cameras zoomed in on performances from Fall Out Boy and the Foo Fighters mid-performance in their suites, giving viewers the sense that they had happened upon an intimate concert. Cee-Lo delivered a rocking version of Prince's naughty classic "Darling Nikki" in the smoky Foo Fighters suite (where a beer bong was in operation as Dave Grohl danced, sang Cure songs, played air drums and posed for snapshots); Soulja Boy was showing Kanye West his "Crank That" dance in West's suite.

Though the suites appeared to be chaotic parties, the MTV-cast revelers were carefully organized and strategically placed for the cameras. In another suite, the MC encouraged everyone to drink and keep the energy up.

Not to be outdone, T-Pain and West danced high atop Las Vegas in one of the Palms' balcony suites as they celebrated "The Good Life." And Lil Wayne, doing double duty in the Fall Out Boy suite after opening the pre-show with Nicole Scherzinger, was particularly animated.

But the TV audience never got full views of those shows, though MTV promised viewers more via its Web site and other "remixed" versions of the show. That might have been the purpose: to whet appetites for repeat viewings by promising glimpses of what they missed during the traditional broadcast. And unlike in recent years, there was plenty reason to come back for more.