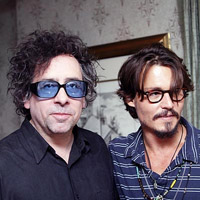 American director of "Edward Scissorhands," "Batman" movies and "Charlie and the Chocolate Factory" Tim Barton is getting a career Golden Lion award at the Venice Film Festival.

To mark the occasion, the festival was screening a 3-D version of "The Nightmare Before Christmas," the animated movie and gothic tale based on a story by Burton that has acquired a cult following.

The award was being presented Wednesday by Johnny Depp, who has starred in several Burton movies, including "Edward Scissorhands" and "Ed Wood," a black-and-white biopic on B-movie director Edward D. Wood Jr.

"Hopefully it just inspires me to keep going," Burton told reporters in Venice, speaking of the award.

The 49-year-old Burton is best known for his quirky stories and the gothic atmosphere of his pictures, which also include "Beetle Juice," "Big Fish," "Mars Attacks!" and a remake of "Planet of the Apes."

He said it was hard to pick a favorite.

"I feel strangely close to all of them, they all have a certain place in your heart," he said.

"There are ones that are a bit more special to me, 'Scissorhands,' 'Ed Wood,"' he said. "But I like parts of a lot of them, and I really enjoy making them. They all have a special place for me."