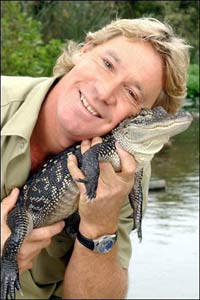 A zoo volunteer, Sharyn Wade, in the southern city of Melbourne, she was traveling home on a train when her sister called her with the bad news.

"When I was talking, people stopped and listened in, and it went quite quiet on the entire carriage," Wade said Tuesday on the first anniversary of Irwin's death. "Nobody could really believe what they were hearing."

Like many others at the park Tuesday, Wade didn't want to be anywhere else on the anniversary of his death.

Wade and her 11-year-old nephew, Ben, and a friend went to the zoo an hour before the gates opened. Dozens of floral wreaths, plants and makeshift signs had been placed at the front of the zoo, and hundreds of more were expected throughout the day.

"We'll probably just walk around and reflect and feel," Wade said. "We've never been to the zoo before, but we wanted to be here today. We've been calling it our pilgrimage."

A year ago, the same location garnered thousands of flowers that eventually spilled over into the zoo itself in an unprecedented outpouring of grief following Irwin's death on the Great Barrier Reef in northern Australia.

The Irwin family said it would have a low-key day Tuesday and asked for privacy.

Terri Irwin, the star's wife, said she planned to spend the day with her daughter Bindi, 9, who has become a major celebrity in the past year with a new television show and fashion range, and son Bob, 3. Reports suggested they were in the United States on Tuesday.

Terri Irwin has announced on the zoo's Web site that she's nominated Nov. 15 as a commemorative day in honor of her late husband, and she's suggesting that everyone wears Irwin's trademark khaki shirts on the day.

That date was chosen in to honor Irwin's favorite giant Galapagos tortoise, Harriet, who was born on that date and died earlier this year at the age of 176.

Things haven't slowed down at Australia Zoo since Irwin, 44, died.

Wildlife Warriors, a conservation group launched internationally in remembrance of Irwin after his death, has had millions of dollars donated to it in the last year.

That money will go toward building what the group calls the world's largest wildlife hospital at the zoo, due for completion in early 2008, and the expansion of wildlife rescue teams and crocodile research programs.

Irwin's larger-than-life image is still visible. A picture of him flopping on the ground stomach-down while facing a crocodile adorns the side of one of the Australia Zoo's buses. Many billboards still depict Irwin screaming his patented, "Crikey."

A Father's Day newspaper advertisement last weekend - the day is celebrated on the first Sunday of September in Australia - had a family photo with Bindi sitting on her father's shoulders and Terri and Bob in front. The photo was framed with a big, curling carpet snake.

"I hope we'll always see him in the pictures, at the zoo, wherever," said Jenny Ford, who flew up from Melbourne with Wade and her nephew. "He'll always be a part of this."