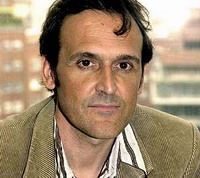 The state-sponsored award highlighted Iglesias "for a professional trajectory full of inspiration, enlivened by a constant search for new and stimulating expressive forms of film-oriented musical composition."

"Spanish culture is very associated with music and after a kind of disjointed period is now living a special moment," said Iglesias, speaking on TV news channel CNN+.

Iglesias is in Los Angeles, where he has been working on Marc Forster's forthcoming film "The Kite Runner," which is based on a novel by Afghani-American author Khaled Hosseini. Published in 2003, it was the first novel published in English by an author from Afghanistan.

A jury nominated by the ministry singled out the musician's score for Almodovar's "Volver" (2006) for special praise as "a perfect example."

In a career stretching back to the 1980s, when he had a band with fellow composer Javier Navarrete, Iglesias has penned a string of film scores, including Oliver Stone's "Comandante" (2003) and Julio Medem's "Sex and Lucia" (2001).

Iglesias, a Basque musician, was born in 1955 in the northern port city of San Sebastian, known for its annual film festival, where he studied piano, harmony and composition.