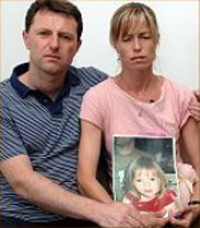 The parents of a British girl who went missing in southern Portugal almost four months ago said Friday they are suing a Portuguese newspaper over an article alleging police believed they were to blame for the toddler's death.

Kate and Gerry McCann said they were "deeply hurt" by the front page report last month in weekly Tal & Qual which claimed that police were certain they accidentally killed their 4-year-old daughter Madeleine, apparently by giving her an overdose of sedatives.

"This statement is without truth or evidence," the McCanns said in a statement e-mailed to The Associated Press.

Police have said publicly the McCanns are not suspects in the case.

Madeleine vanished May 3 from an apartment where she was sleeping with her 2-year-old twin siblings in Praia da Luz, a town on Portugal's southern Algarve resort coast. Her parents were having dinner in the hotel's restaurant with vacationing friends and said they checked on their children at regular intervals.

The McCanns have remained in the Algarve since the disappearance, running an Internet campaign to find their daughter and visiting several countries where she may have been taken by an abductor. They have indicated they may soon return to Britain, where they work.

"The McCanns feel the (newspaper) allegations are very serious and damaging to their professional and personal reputations," the statement said.

They have instructed lawyers to sue Tal & Qual's editor and a reporter for defamation. The case would be heard in Porto, a city in northern Portugal, where the paper is based.

Nobody at the newspaper was immediately available for comment.

The McCanns currently have no plans to attend any court proceedings, a spokeswoman said. Cases can take years to come to trial in Portugal.